Neal passed with anticipation and joy into the arms of Jesus at his home in Brentwood on February 27, at the age of 76, after a long battle with cancer. He was born on May 31, 1938 in Everett, Washington to Gregg and Louise Doty and later moved to Bellingham, Washington, where he met his future wife, Jean Pitts. Neal and Jean were married in 1960 and enjoyed 54 years together in ministry, making memories and a family of two children, 4 grandchildren and 1 great grandchild.

Neal graduated with honors from Moody Bible Institute in Chicago, Illinois in 1960. His first ministry was as Youth Minister at Broadway United Presbyterian Church in Bellingham. He later joined the WMBI radio department at Moody; sang with the 16 Singing Men and directed choirs for Chicagoland Youth for Christ. In 1965 he came to California to minister at Redwood Chapel Community Church in Castro Valley, where he served 7 years as Youth Pastor, 7 years as Associate Pastor and 7 years as Senior Pastor. His next call to ministry was at Northshore Community Alliance in Richmond where he served as Senior Pastor for 19 years. In 2003, at age 67, he resigned from a fulltime pastorate and moved to part-time ministry at Brentwood Neighborhood Church. This move has given the family a closeness they have enjoyed, with Family Dinners at daughter Shannon’s home on Thursday evenings. 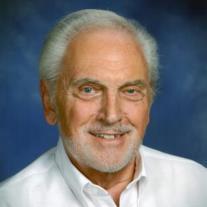 I am so sorry to read of Neal's passing. I had not known. I would like to contact you Jean.

Help tell the story of Neal by contributing to the Life Event Timeline. Upload the photo of an event...

I am so sorry to read of Neal's passing. I had not known. I would like to contact you Jean.