Born in Canton, China. Attended the Pooi To Schools and and Ling Nam University with a Degree in Education. She was a teacher in Macau’s Yuet-Shen High School and Principal of the Grammar School. During this time, she met her husband, John Mon Lee, an aeronautical engineer in the U.S. Air Force. They were married in 1943 in the beautiful province of Kwang-Lien. Following his discharge in 1946, the young with their one-year-old daughter returned to Walnut Grove, CA, John’s hometown. John returned to ranching and May Wan earnestly assumed the role of a homemaker. As the daughter of a Minister, May Wan assimilated into her new environment with the association of a small Baptist Church, which was the core of community activity in the nearby Chinese Hamlet of Locke. In time, her family grew to five daughters and a son. May Wan and John conscientiously nurture their children notably in education and spiritual guidance. On one occasion, when a young son questioned her athletic ability, a four-foot, eleven-inch mother managed to outscore him on a one-to-one challenge on the hoops. So, lessons on humility and sportsmanship were learned in a convincing shut-out!

During the years on the ranch, May Wan demonstrated a multitude of interests. She developed superb cooking skills with guidance from John. She taught her daughter sewing and needlework skill. She was an ardent reader. She maintained a near daily correspondence with her father in the form of letter. Her greatest love was gardening, a hobby that she shared with her paternal grandfather as a young girl.

In 1979, John retired and they moved to Berkeley, CA to be near their adult children. Their passion for gardening still remained and admiring neighbors can be often seen enjoying their lunches among the trees and flowers of the front yard. They cherished their spiritual relationship by worshipping Jesus at Cumberland Presbyterian Chinese Church and San Francisco Chinese Baptist Church, where she served as Secretary of the Women’s Club. May Wan whole heartedly accepted God’s Word and was a devout student of the bible.

A joyous time for them was the arrival of grandchildren. They were doting grandparents and are often seen with children under their care in their home.

Following John’s passing, May Wan’s home remained opened to congregational friends as they frequently gather for bible study, luncheons and reap the bounty of the garden. The camaraderie continued for nearly a decade until the onset of age prevented them to meet.
May’s family was her utmost pleasure in her twilight years. Her family gathered at her home frequently for dinners and she would always be leading the way with a special prayer. Her favorite holiday was Christmas. May Wan was always beautifully dressed and meticulously groomed for photographic opportunities with her family, especially her grandchildren. Her endless love for her family was perhaps the main factor that sustained her life for nearly a century of time.
May Wan was unselfishly generous, wise and witty, encouraging, had boundless energy for life and always provided practical guidance. She will be dearly missed by her adoring family and friends, as she unites with her Maker.

Friends and family are invited to a memorial service at 12 pm on Saturday May 2nd, 2015 at Sunset View Cemetery, Colusa and Fairmount Ave. in El Cerrito, CA. A private burial for immediate family will be at a later date.

Donations can be made in May Wan’s memory at San Francisco Chinese Baptist Church at 1811 34th Avenue in San Francisco, CA 94122. 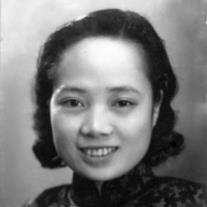 Help tell the story of May by contributing to the Life Event Timeline. Upload the photo of an event...

Timeline for May Lee

Condolences for May Lee