Ludwiga Blum was born May 23, 1923 in Mannheim, Germany to Stefan Blum and Hanna Jacobi. With the rise of the Nazis she immigrated to Oakland, California in November 1938, her older siblings having left Germany earlier. Educated in Europe and at Holy Names University in Oakland, she was a nurse and an accomplished violinist. In 1939 she married Nathan Karp, a 1936 graduate of Cal Tech and then a civil engineer at the Naval Air Station in Alameda, and they made their home in Oakland.

After Pearl Harbor, they moved to the Naval Air Station at Long Beach, and then to Puerto Rico where Nathan was the lead engineer for the design of Roosevelt Roads, the top secret Naval Air Station being built for the British Fleet in the event the Germans invaded the UK from the occupied low countries. Nathan and Lulu, then with two children, were relocated to the Norfolk Navy Yard. After the war, Nathan continued as a civil/structural engineer at the Brooklyn and Baltimore Navy Yards, followed by engineering of ports in Haifa and Veracruz. They settled in Berkeley in 1951 when Nathan established his practice as a structural engineer in San Francisco. He died in 1984.

Lulu was an enthusiastic violinist who enjoyed chamber music and performed as first violinist for many groups. Lulu was a prodigious knitter and loved cooking and baking for her family and string quartets in her home. An avid reader of great literature and philosophy, world traveler, hiker and student of nature, especially her unique collection of orchid cacti. Lulu will be cherished by her family and the many friends she made during her lifetime. 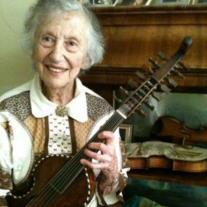 Help tell the story of Lulu by contributing to the Life Event Timeline. Upload the photo of an event...