Mrs. Hisako Horikoshi passed peacefully into God’s hands on August 21, 2015. She was born on March 28, 1916 in Wonsan (Genzan), North Korea, the youngest daughter of Heitaro and Tama Mitamura. Her father was a judge and her mother was a schoolteacher. Hisako met her future husband, Yoshikazu (Casper) Horikoshi, an ordained Methodist minister, when he was sent to Manchuria to start a new church among the Japanese in Tsitsihar (Chichiharu), Manchuria, and attended church meetings in Korea during his travels. After their engagement, she attended a women’s seminary in Osaka while he was serving at a church in Kyushu. She and Casper were married in Kobe, Japan and came to the United States in 1938. After immigrating to the U.S., they began serving Japanese churches – first in Salem, Oregon and then Wapato, Washington. While they were serving the church in Wapato, World War II broke out. She and her family were interned in the concentration camp in Heart Mountain, Wyoming, one of ten such camps established during the war to imprison West Coast Japanese.

Upon release from camp, they moved to Boston, Massachusetts, where Casper pursued graduate studies at Boston University, School of Theology. They were called to serve at West Tenth Methodist Church in Oakland, and moved their family to California in 1952. They were so moved by the faith of one first-generation Japanese Christian that they decided to continue to serve Japanese immigrants. They subsequently served congregations in Alameda, Florin, Walnut Grove, San Jose, Oakland (Lake Park UMC) and Fresno, California; Toronto, Canada; Arvada, Colorado and Tsurukawa, Japan.

Following Casper’s retirement in 1983 and his death in 2001, Hisako was an active member of the Lake Park United Methodist Church in Oakland, and a tireless supporter of continuing Japanese language (Nichigo) worship services, Bible studies and gatherings in the Bay Area. She inspired and deepened the faith of all she encountered. Her faith in God and love of the church was the foundation of her 99-year life journey around the world.

She loved her ever-growing family, enjoying family trips to Yosemite, cooking special food for family gatherings and singing together, and was an encouraging presence in the lives of each new generation.

A memorial service will be held on Saturday, September 26, 2015, 11 a.m. at Lake Park United Methodist Church, 281 Santa Clara Avenue, Oakland, CA 94610. Private Inurnment will take place in Viewpoint Garden at Sunset View Cemetery. In lieu of flowers, donations may be made to your local church, favorite charity or to Lake Park UMC. 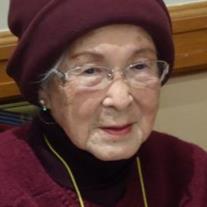 Help tell the story of Hisako by contributing to the Life Event Timeline. Upload the photo of an event...