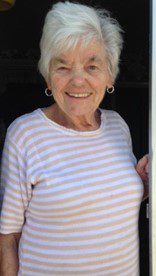 Hilda Luty of Albany passed away on 7/4/2021 at the age of 93. Hilda was born in Germany where she grew up on the family farm. As a young woman she met and married Royal F. Luty, a soldier in the U.S. Army, stationed in Germany. Over the next twenty three years she and Royal, who was known as Gus moved their family between Germany and California each time he was transferred by the Army. Over that time they had five children, Allen, Charles, John, Karen and Andy. Karen passed away as a child from leukemia.

In 1963 Gus and Hilda purchased a house on Jackson Street in Albany where Hilda raised her children as a stay at home Mom. Later she worked as a delivery person for the Oakland Tribune and spent many years as a proud employee of the Albany School District while working at the Child Care Center at the University Village. Upon her retirement her supervisors and co-workers honored her with these words, “Hilda demonstrated a sincere commitment to the children, parents and staff and her kindness and friendliness to children and staff made “her kitchen” the communal hub of the Center.” She was also a long time member of St. Ambrose Catholic Church in Berkeley.

Hilda was a strong and independent woman and could be seen walking to the grocery store either on Solano Avenue or San Pablo Avenue even as she approached  her 90th birthday. After Gus passed away in 2015 she continued to live in the family home until just a month before her passing.

Hilda is survived by her children; Allen (Peggy), Charles (Julita), John and Andy. She was a caring and generous grandmother to nine grandchildren. Her granddaughter Monica passed away in 2019.  She is also survived by two brothers, Leopold and Norbert both of Germany as well nieces and nephews in Germany.

Hilda will be interred at Golden Gate National Cemetery in San Bruno joining Gus and Karen.