Marcella J. Thomas (“Marci”) passed away peacefully in the comfort of her home through hospice on June 1, 2016, at the age of 92, due to complications after emergency surgery. She was born and raised in Portland, Oregon, and one of eleven siblings. She took on a maternal role at an early age of 17, when her own mother took ill, and so Marci helped raise her younger brothers. In the late 1950’s she moved to San Francisco and was later introduced to Bud Thomas through a mutual friend at a ski club trip in Oregon, where they later had their first date at the Buena Vista Café in SF. They were married in 1960 at the original Newman Hall Parish. Soon after, Bud’s roommate, Dan, was introduced to Marci’s roommate, Virginia, and they too later married, all four remaining the best of friends for the next 50+ years. Marci and Bud adopted their daughter, Maria, in 1963. They lived and raised Maria in Berkeley and lived in the same lovely home there for their entire marriage of 53 years.

Friends and family knew Marci for her kind and gentle nature, many interests and active life. She nurtured several close life-long friendships. She had a zest for life and treasured the outdoors and nature, was adventurous as an avid skier, Sierra Club leader, mountain climber, tennis player, and gardener, and was a member of several garden clubs, along with Bud. She also loved cooking, music and art. She worked at an architectural firm for 20+ years. In the 1980’s, she opened an art gallery in downtown San Francisco and became a successful art dealer for years to follow. Marci was also an incredible cook, like Bud, and they loved creating gourmet meals together to share with friends and family, always so inclusive of people in their home. She loved children and animals, which would always bring a smile to her face. Marci was a sweet, delightful and cheerful lady, and always had a compliment, even for strangers. She never asked for much, and was always there for her family. She had a flare for style, and always elegant. Marci had a great life, and was devoted to her husband, daughter, and garden. She was a wonderful wife, mother, sister and friend, and touched everyone’s lives who knew her, with her gentle manner. She will be greatly missed.

Marci’s husband Bud Thomas died in 2013. She is survived by her daughter, Maria, of Walnut Creek, CA, her brother George Springer of Berkeley, CA, her sister Eileen House, of Woodburn, OR, and many nieces and nephews and extended family. Memorial contributions can go to East Bay Regional Park District; or Hospice of the East Bay. 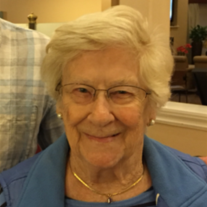 Help tell the story of Marcella by contributing to the Life Event Timeline. Upload the photo of an event...