Judy Folkmanis, 74, passed away on Saturday morning, January 9, 2016 at her home in Berkeley, with her husband and two sons at home with her.

Judy was born in New York City on Aug. 27, 1941, to Henry Siegel and Ruth Altrowitz. Her mother passed away when Judy was a small child, and her father, a history teacher, remarried Lillie Dugoff. Judy grew up near the Brooklyn Botanical Garden and famed Ebbets Field, home of the Brooklyn Dodgers, and attended Wingate High School, where she played flute in the school orchestra. She often spoke fondly of her roots, for example reminiscing about taking the subway to Manhattan as a child to watch the Macy’s Thanksgiving Day Parade, which she faithfully watched on television for years after moving away from New York.

Judy initially attended Bucknell University in Lewisburg, Pennsylvania, before transferring to Antioch College in Yellow Springs, Ohio, from which she received a Bachelor of Arts in Biology degree in 1963 and where she met her future husband. Judy and Atis Folkmanis were married in Antioch’s Rockford Chapel in March 1963. Immediately after Judy’s graduation later that year, the young couple headed off to Malaysia, where they served as Peace Corps volunteers in the town of Bukit Mertajam for two years. Upon completion of their Peace Corps tour of duty, Judy and Atis traveled throughout Asia and Europe, including a visit to a deserted Angkor Wat in Cambodia and a stint on a kibbutz in Israel, before returning to the U.S.

Judy and Atis lived in the Boston area until 1972. Their first son, Daniel Evan Folkmanis, was born in Boston in 1966 and their second son, Jason Folkmanis, was born in Cambridge in 1968. After Atis received a PhD in biochemistry from Brandeis University in Waltham, the Folkmanis family headed cross-country to California, where Atis began working as a post-doctoral student at the University of California. To supplement his income, Judy sold puppets of her own design — building upon a childhood love for creating handicrafts — on Telegraph Avenue in Berkeley, which at the time hosted a vibrant street market for arts and crafts. Judy’s vision of realistic and high-quality animal puppets found an immediate market, and consequently Judy and Atis decided by 1976 to start Furry Folk Puppets, which is now known as Folkmanis, Inc. and which continues as her legacy today, providing education and joy to children and adults alike.

Judy and Atis moved in 1988 to a house on Mariposa Avenue in Berkeley, and it was here that Judy lived the rest of her life. She became a fixture in Berkeley’s Gourmet Ghetto, refusing to let her four-decade battle against multiple sclerosis prevent her from making regular runs past Live Oak Park and down Shattuck Avenue on her scooter. In the same vein, Judy and Atis continued to travel the world together in spite of her disability, visiting locales as far-flung as Botswana, New Zealand, Russia and Tanzania.

In addition to Atis, Dan and Jason, Judy is survived by three granddaughters and one grandson. Her brother, John Siegel, has passed away.

A gathering in memory of Judy will be held on Saturday, January 23, 2016 from 2 to 5 p.m. in the chapel of the Sunset View Cemetery at the corner of Colusa and Fairmount avenues in El Cerrito. All are welcome. Atis Folkmanis requests that in lieu of flowers, any contributions that guests may wish to make be donated either to Doctors Without Borders, the National Multiple Sclerosis Society, or to Antioch College in Yellow Springs, Ohio. 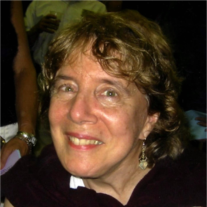 Help tell the story of Judy by contributing to the Life Event Timeline. Upload the photo of an event...