Chris Thompson, an award-winning investigative journalist who always wore shorts and loved to cook for his friends, died Jan 21st of an apparent heart attack in Berkeley, California. He was 46.

Chris was born in Utah, spent his formative years in Oregon and then settled in Monterey County, California. He earned a scholarship to the private Robert Louis Stevenson High School in Pebble Beach, California.

He studied English Language and Literature at the University of California at Berkeley, where he was a proud resident of Barrington Hall, the infamous housing co-op that was a hot-bed of anti-apartheid activism and punk rock shows. Chris was one of the squatters who fought the official closure of Barrington in the spring of 1990, refusing to leave.

After graduating in 1994, he landed at the East Bay Express, his professional home for 12 years. He was well regarded for his investigative reports, including a two-part expose of Yusuf Bey, Your Black Muslim Bakery and the Bey “family” empire, as well as their strong ties to Oakland’s political establishment. He also wrote about AXT Inc., a semiconductor-manufacturing firm in Fremont that had poisoned Chinese immigrants with arsenic.

Chris married Eliza Strickland in May 2007, in a double wedding at a retreat center in the dry hills of Lake County. Their co-bride and groom, Althaea and David, were married in a Jewish ceremony. Chris and Eliza had a film noir ceremony. They moved to New York City that summer so Chris could take a job with The Village Voice. They lived in a brownstone in Crown Heights, Brooklyn, with their two cats, Walter and Pokerface. They split in 2014, and the divorce was official in 2015.

A man of esoteric interests and fascinations, one of Chris’s favorite things about living in New York was spotting landmarks and bits of urban infrastructure that he’d read about in The Power Broker, Robert Caro’s legendary 1,200-page biography of the controversial urban planner Robert Moses. That book, with its nuanced portrait of NYC’s “master builder,” was the kind of nonfiction he admired most: scrupulously reported, beautifully written, pulsing with politics, and with an undercurrent of outrage over greed and injustice in the world. When driving on the Northern State highway that stretches along the north shore of Long Island, he loved pointing out the arched stone bridges that spanned the roadway. The bridges were so low, he’d explain to anyone who would listen, because that f**cker Moses didn’t want poor people in buses to come to his precious Jones Beach, which he’d built as a playground for prosperous New Yorkers.

In 2008 Chris took up the banjo and Eliza started playing the mandolin. Together with their friend Sandra Upson on accordion they formed the Sumthin Sumthin Trio. They specialized in enthusiastic and odd covers of pop songs. Chris sang lead on such songs as “Kiss” by Prince, “Satellite of Love” by Lou Reed, and “Body of an American” by the Pogues. He had a strong voice, and sang with gusto. In other musical sessions with Eliza’s family, he specialized in folk songs of the radical left: labor organizing tunes, songs of oppressed Appalachian miners, Irish rebel songs, and so forth. Joe Hill’s “The Preacher and the Slave” was a particular favorite. That song urges working men to rise up and demand their just desserts here on earth, rather than be soothed by the preacher’s promises of “pie in the sky.”

Chris moved back to Berkeley in early 2015 and took a job at CorpWatch, a local non-profit, where he wrote a report on workers rights and federal contractors. At the time of his death he has just begun working on a new project to investigate military contractors in the drone war.

Chris is survived by his mother Kathryn Thompson of Central Point, Oregon; his brother Brendan Thompson and sister-in-law Beth Moon of San Pablo, California; his niece and nephew Orion and Tallulah, and countless friends.

A celebration Chris’s life will be held on Monday, February 15 from 2 to 5 pm at the Humanist Hall at 390 27th Street in Oakland, CA. All are welcome to attend. After a program of speakers, there will be food! If you are joining us and would like to contribute, please feel free to bring beverages or desserts.

In lieu of flowers, please consider making a donation in Chris’s name to CorpWatch, which investigates and exposes corporate violations of human rights, environmental crimes, fraud and corruption around the world. You can donate online at www.corpwatch.org or write a check to CorpWatch and mail care of Pratap Chatterjee, CorpWatch, 1958 University Avenue, Berkeley, CA 94704. 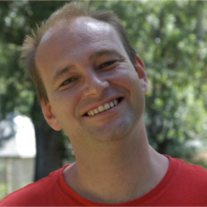 Help tell the story of Chris by contributing to the Life Event Timeline. Upload the photo of an event...